Module 2 What can you do?

Module 7 My past life 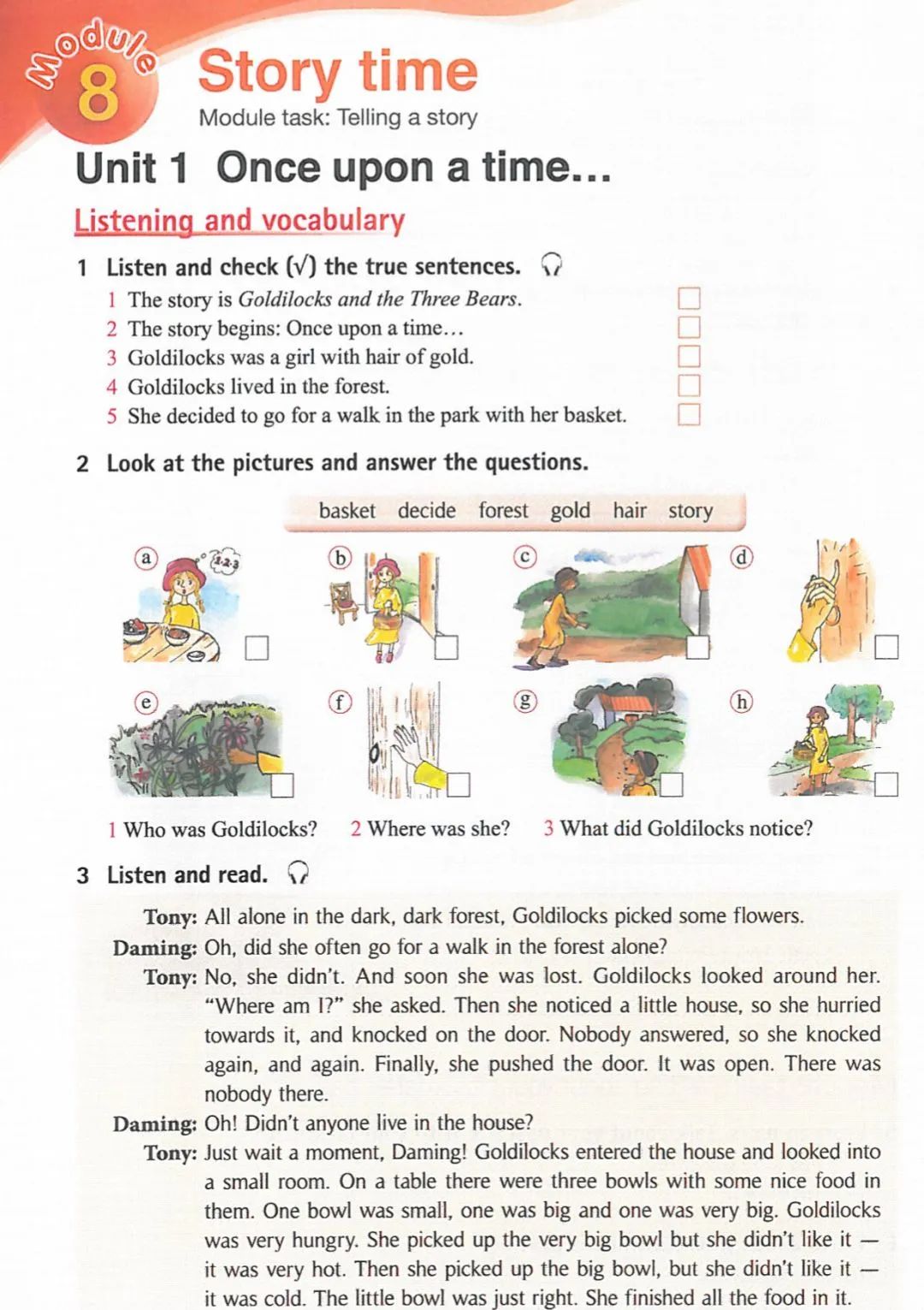 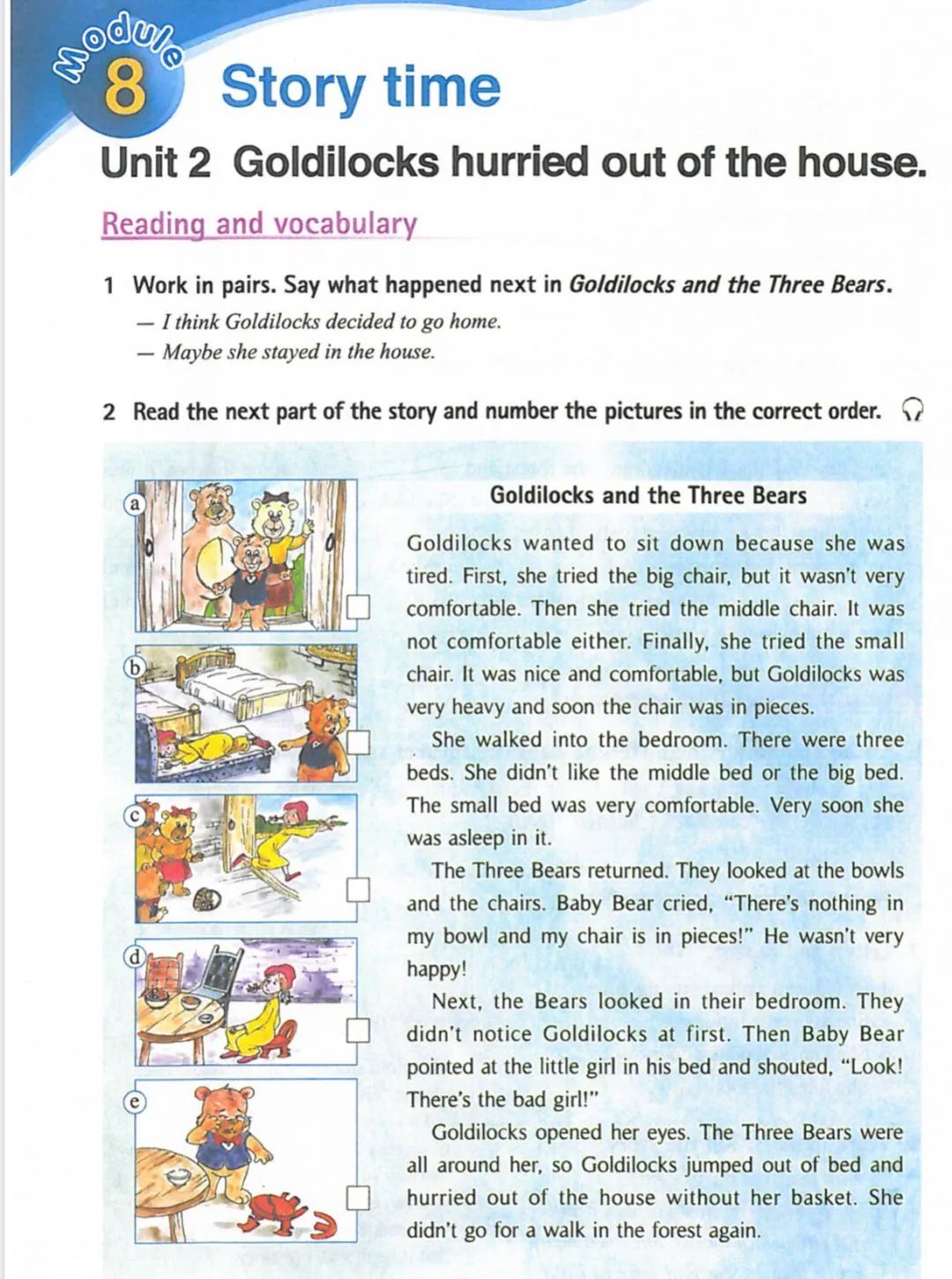 1. All alone in the dark forest, Goldilocks picked some flowers.  金凤花姑娘独自走进了阴暗的森林里，摘了一些花。

3. Then she noticed a little house, so she hurried towards it, and knocked on the door.  她注意到一栋小房子，于是她赶快朝那栋房子走了过去，敲了敲门。

4. Nobody answered, so she knocked again, and again.  没人回应，于是她又反复的敲门。

5. It was open. There was nobody there.  门开了，里面没人。

6. On a table there were three bowls with some nice food in them.  在一张桌子上有三个碗，碗里盛着好吃的东西。

7. The little bowl was just right. She finished all the food in it.  小碗里的正好，她把小碗里的东西全吃光了。

9. It was not comfortable either.  它也不舒服。

10. Soon the chair was in pieces.  那把椅子一会儿就散架了。

14. Then Baby Bear pointed at the little girl in his bed.  小熊指了指他床上的小女孩。

15. Goldilocks jumped out of bed and hurried out of the house without her basket.  金凤花姑娘从床上跳了下来，也顾不上提篮子，便冲出了房间。

I am Betty.We had a good time last weekend,we went on a school trip to 地点.We first took a bus to there.Then we ate something and sang songs.We enjoyed ourselves a lot.

At last our headmaster suggested us to play a game named" Bingo ",I won a gift,it was a toy car.I think you must like it,so I send you this email.Would you like to come over to my house for the toy car?

5. —Which jacket do you prefer, this one or that one?

12. —Did he visit the park yesterday afternoon?

strawberries on the farm last weekend. That was interesting.

Once upon a time, there was a hungry fox that was looking for something to eat. He was very __1__. No matter how hard he tried, the fox could not find any food. __2__ he went to the side of the forest and looked for food there. He found a big tree __3__ a hole in it.

The fox happily began to eat. After the fox had finished __7__， he felt thirsty and decided to leave the hole __8__ drink some water. No matter how hard he tried, he could not get out of the hole. Do you know __9__？ Yes, the fox had eaten so much food that he became __10__ big to go through the hole.

Long long ago, there was a beautiful little girl. She was alone because she had no family and no home. She only had her clothes and some bread. But she was very kind.

One day, in the cold dark forest, she met another child who asked for her dress. The little girl thought that it was dark and nobody could see her, so she gave her dress away. At last, she had almost nothing: no family, nowhere to live, nothing to eat and little to wear.

Suddenly, stars fell from the sky. These stars became pieces of money and a beautiful dress.

The little girl was rich for the rest of her life and she still helped the people in need with her money.

Mr Black was very old, so it was often difficult for him to remember things. However, he still liked travelling very much, so he and his wife went to Spain every year. One summer when they were there, they went to visit their friends, the Bushes. They had two young daughters.

One afternoon Mr Black was talking to one of the girls in the garden. “Were you and your sister ill when my wife and I were here last year?” he said to her.

The old man said nothing for a moment, because he was thinking. Then at last he said, “Oh, yes, I remember now! One of you died. Which one of you was it, you or your sister?”

The girl answered, “It was me.”

1.How was it for Mr Black to remember things?

2.Where did Mr Blacks go every year?

3.How many children did Mr Black’s friend have?

5.Who died last year, the girl or her sister?

Once there were two wolves.They had a son when they were very old.The baby wolf was very clever and they loved him very much.But the baby wolf had a problem.He liked to eat vegetables better than meat.His favourite vegetable was carrots.His parents worried about this a lot.They tried their best to teach him to hunt(打猎)and eat meat.

One day the baby wolf saw a rabbit eating a carrot.He jumped onto the rabbit very quickly and caught it.His parents were really happy to see this.Then they heard their son saying to the rabbit，“I don\\\\\\\'t want to eat you.I only want your carrot.Give me the carrot，now！”

I was very busy last weekend. On Saturday morning, I read English and did my homework. In the afternoon, I played chess with my classmates, and then I went shopping with my mother. In the evening, I saw a film and then I went online. On Sunday morning, I played basketball with my friends, and then we went to KFC. In the afternoon, I went to my hometown to see my grandparents with my parents. In the evening, I watched TV and listened to some music. I was busy but I had a good time.